Francois Daulte, in his 1971 Renoir Catalogue Raisonné entry for this portrait, states 'according to some, this picture represents Eugene Renoir, the only son of the artist's brother Victor'.

And in the catalogue index:

Paul Renoir, grandson of the artist and owner of extensive family archives, has now confirmed the sitter's identity as being Eugene [see attached letter to Richard Nathanson]. Eugene was born in 1863 and died in 1941. He was present at the wedding of Claude, Paul's father, and visited the family home almost every summer.

Renoir's son Jean, in his biography 'Renoir, My Father', provides [P.275-278] a vivid description of the eccentric, half Russian Eugene which explains the composure and fortitude of character so wonderfully depicted in this very particular and beautiful portrait.

'Once when my cousin Eugene was spending the summer at Essoyes, in a fit of gallantry he offered to make a neat pile of the firewood which a wood-cutter had just delivered to my grandmother Melie. And an astonishing sight it was to see this man who had never deigned to carry even so much as a small parcel set about piling up logs under the old lady's critical eye. He had got well on with his chore, when she remarked: 'You are not doing it the right way. You should not put the little logs in with the big ones.' 'You are quite right,' answered Eugene quietly, and, dropping the armful he was carrying, he went home and took a nap.

Because Renoir rather admired his nephew's unruffled calm, I think I ought to give some further details about Eugene.

It may be remembered that Uncle Victor, who was five years older than my father, had become a tailor. A Russian grand duke was so pleased with the jackets he had made for him that he took my uncle back to Russia with him, where he married and had a son called Eugene, who my father maintained was more Russian than the Russians. Victor became a fashionable tailor in Saint Petersburg, made money, bought himself a two-horse Victoria for the summer, a sleigh for the winter, and a country house. He covered his wife with jewels. She was the soul of indolence, for she rarely got up from her chaise longue, and fed entirely on liqueur chocolates. Young Eugene spent most of his time with the servants and a tutor who made him learn all the novels of Eugene Sue by heart.

My uncle's undoing came about through the vogue for women's tailor-made suits, for it brought him innumerable female customers whose charms he was unable to resist. The more unfaithful he was to his wife, the more she reclined on her chaise-longue and ate nothing but chocolates, and finally she died from the effects of it all. Victor squandered his fortune on his lovely customers and had to sell his house and return to France with Eugene. By that time he was in poor health himself. Caviar and vodka had done for him what March sleet and the autumn rains were later to do for his younger brothers. My mother settled him with some peasants in Essoyes, where he lived quite happily for several years. He so much loved staying in bed that eventually he never left it.

Uncle Victor died without too much suffering, and he was sincerely missed by the good people he had stayed with, for they had grown quite attached to this gentleman who had had his fling.

As for cousin Eugene, my mother took him in hand and set about finding some occupation for him. She got him placed as an apprentice to a dealer in canvas from whom Renoir bought his materials, but at the end of a week he was discharged. He met with the same fate after working in turn for a maker of picture-frames, a tailor, and a grocer. Eugene frankly warned my parents that it would be the same no matter where he was placed. Although still young, he had, after seeing his mother reposing day in and day out on her couch, sworn to follow her example and never lift his hand to do a stroke of work. My mother tried to make him feel ashamed. She pointed out that a boy of eighteen, in good health and with a good education, should earn his living. The appeal to his self-respect failed, however, whereupon she tried to frighten him with the spectre of poverty. But he shook his head, smiled with an expression of gentle stubbornness, and in his drawling, slightly nasal voice, said, 'My dear Aunt, I have sworn never to work, and I don't intend ever to work.' He added that the prospect of becoming a tramp had not terrors for him. When she found that her arguments were of no avail, she had a brilliant idea: put him in the army! She didn't wait to see what his reaction to this suggestion would be, but marched him off to the Pepiniere Barracks and made him sign up for five years.

He soon became an NCO., but refused to attend an officers' training course because the effort involved was against his principles of professional laziness. He was transferred to the Colonial Army, and after re-enlisting several times he reached an age at which he was allowed to retire, on a pension which was modest but secure. Except for a few skirmishes, minor battles and military landings, which rather amused him, Eugene spent the greater part of his time in the army improving a network of roads in the jungle. Lying in a hammock, not in the least disturbed by the pickaxes or the shouts of those working under his orders, he languidly encouraged the cohorts of coloured troopers to sweat away for the glory of Western civilization. His subordinates worshipped him because he never raised his voice when giving orders.

He never married, as that would naturally have involved a certain amount of expense and to defray it would have meant working. Still, he almost yielded to the temptation once. The object of his passion was a widow. She belonged to a tribe in Central Africa, and was not only coal-black but as beautiful as a piece of ebony. Unfortunately her tribal religion forbade her to remarry until five years after her husband's death. Eugene was sent out on military duty to Indo-China and he gradually forgot his Congolese Venus.

He was very courageous; and paradoxically enough his laziness added to his courage. Once in Indo-China he settled in the wilds, in a hut in which a king cobra had installed itself. Eugene stayed in the lower part of the hut, while the cobra made its home above, just under the palm-leaf roof. 'As a room-mate he was no trouble at all. On the contrary, with him around there wasn't a rat to be seen. I could hear them scuttle when he would come back in the evening. He moved into the beams over my bed. We looked each other in the eye for a minute, and I blew out the lamp. In the morning, when he went out again, the noise of his movements served as an alarm-clock.'

In addition to Russian and French, Eugene spoke Mandarin Chinese fluently, as well as Cantonese, Annamite, and several Indo-Chinese dialects. When he left the army, one of his friends made him the sales representative for the whole of Siberia of a well-known brand of champagne. He loved travelling about in a sleigh. 'If you are well wrapped up in furs you don't get cold and you can sleep.' But he had to sell his product to his customers - and 'that is work,' so he gave up his lucrative job.

In 1914, when he was well over fifty, he re-enlisted in the Colonial Army, and fought under General Mangin's command. He took part in several bayonet-charges, and was wounded at Verdun. I still have his Military Medal, the most distinguished of the French decorations - or at any rate the only one that still amounts to something.'

Of the six hundred and forty five figure paintings reproduced in Daulte's 1971 'Catalogue Raisonné 'Les Figures'[1860-1890], just fifty are single adult male portraits. This rare portrait is a touching mark of Renoir's deep affection and respect for his sitter.

Hands painted as though almost of cascading water. And the clear lyrical delineation of the figure moving the eye from foreground, around body and head, and through the right arm into distance. Both accelerate the movement essential in conveying the character and mood portrayed.

The mirrored reflection of outside light, and curtain veil wafting dreamily across the doorframe. The jacket's gently swirling pearly greys set against the soft blue wall, vivid red of his tie, and white of the collar. The pulsating, rhythmic movement of brush stroke colour and line. All accentuate the stillness of Eugene's steadfast character; and composed, monumental presence. His serene, fearless gaze fixes us. Also with humour, barely discernible about the mouth and in the subtle softness of the eyes, at the manifold absurdities of the world.

Eugene's hands - their strength and gentleness wonderfully depicted - are a sublime symbol of his nature. For Renoir, hands were the profoundest manifestation of character, as Jean Renoir recounts in his biography [P. 17].

'When I [Renoir] think that I might have been born into a family of intellectuals! It would have taken me years to get rid of all their ideas and see things as they are. And I might have been awkward with my hands.' 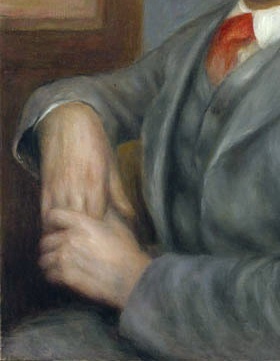 He talked constantly of 'hands'. He always judged people he saw for the first time by their hands. 'Did you see that fellow, and the way he tore open his packet of cigarettes? He's a scoundrel. And that woman: did you notice the way she brushed back her hair with her forefinger?…a good girl.' He would also say sometimes: 'stupid hands'; 'witty hands'; 'ordinary hands'; 'whore's hands'….

One usually looks people in the eyes to see if they are sincere. Renoir always looked at their hands.

We shall see, gradually, how hard he found it to accept standard values. The idea that intellect is superior to the senses was not an article of faith with him. If he had been asked to name the different parts of the human body according to their value, he would certainly have begun with the hands. In an old desk drawer at home I have a pair of gloves which belonged to him: pale-grey gloves made of very fine leather, whose size sets one musing. 'he had unbelievably small hands for a man,' Gabrielle said. If any ancestor were responsible for Renoir's hands, then instead of thinking of his shoemaker grandfather's thick fist, I should be inclined to conjure up the tiny fingers of some great lady more accustomed to playing the harpsichord than to doing the washing.'