Unusually, the recto and verso drawings relate to three of the twenty-five sculptures - each of which is reproduced below.

The verso drawing is closely related to the carving in the National Gallery of Art Washington. The rich heavy black seems already to be 'feeling' the sculpture.

The dream-like quality of the face. Its length. And implied mass of hair ['à l'Egyptienne'] with its distinctive fringe, suggest that Modigliani 'saw' Akhmatova in this drawing. The deep effect she had upon him and his work is perhaps not fully appreciated. But it is not hard to comprehend given her charismatic beauty and great poetic gift.

Three of Modigliani's 'Female Head with Chignon' limestone heads [in The National Gallery of Art, Washington; The Guggenheim; and Tate Modern] were photographed in Cardoso's studio on the occasion of Modigliani's first sculpture exhibition there in March 1911. His obsession with Akhmatova is evident from the fact that he wrote to her throughout the previous winter. And from the phrases she remembers. 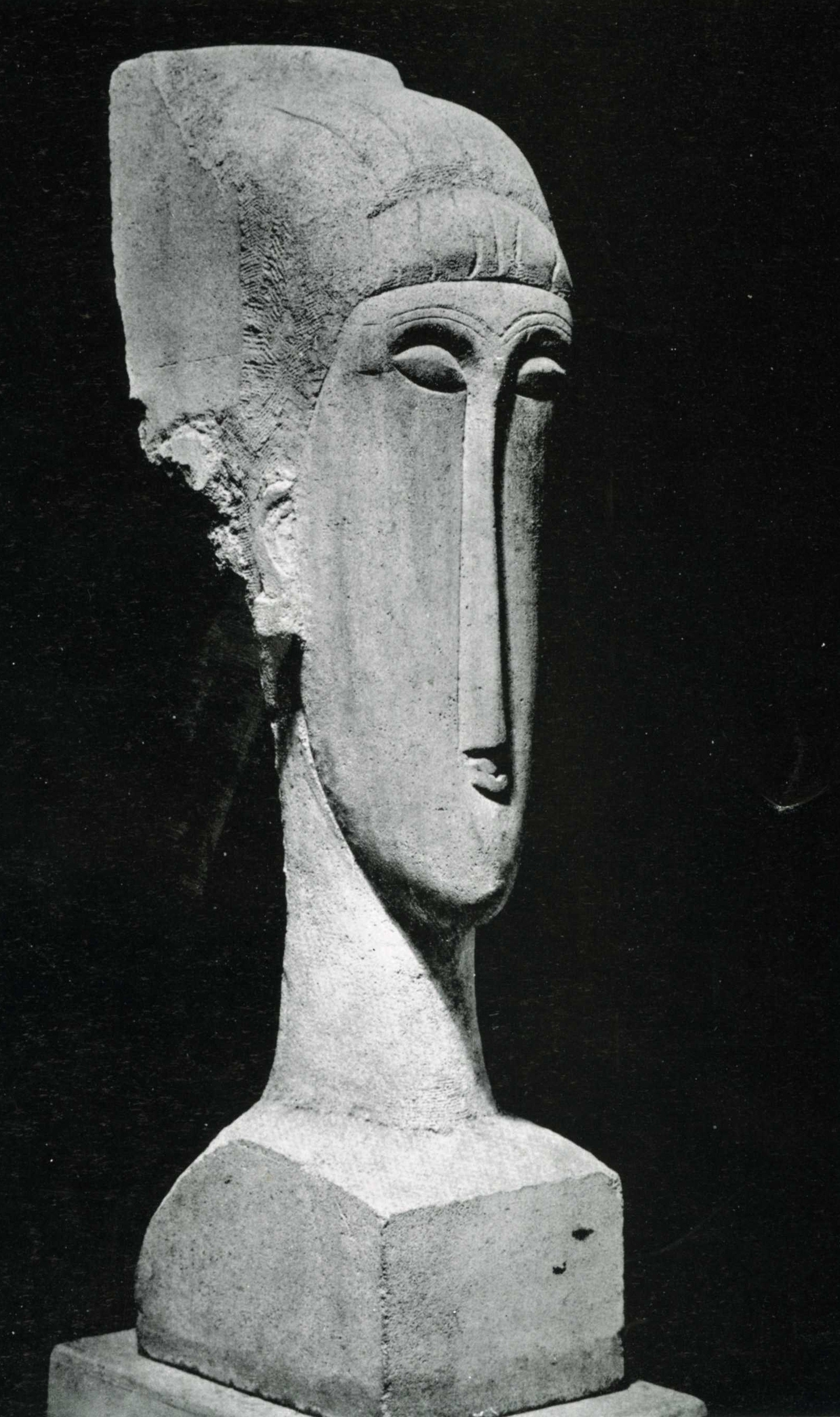 The National Gallery of Art, Washington

At this time he was busy working on a sculpture in the small yard next to his studio (in the deserted lane you could hear the echo of his hammer), dressed in his working clothes. He called his sculpture 'la chose' - it was exhibited, I think in 1911 at the Independents. He asked me to come and view it, but at the exhibition he did not come over to me because I had not come alone but with friends. The photograph of this 'chose' which he gave me disappeared at the time I lost most of my possessions.

Did he give her a photograph of one of the heads she had helped inspire? And was he angry and hurt because he could not tell her, in the presence of others, how deeply she had inspired him? 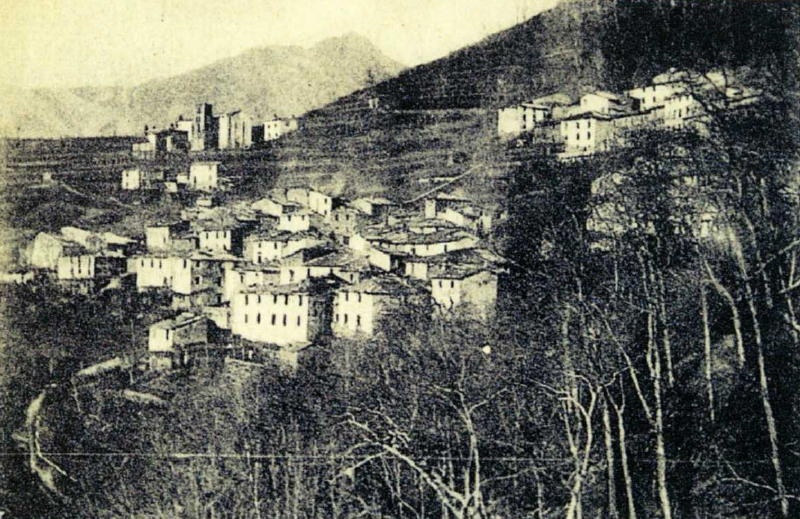 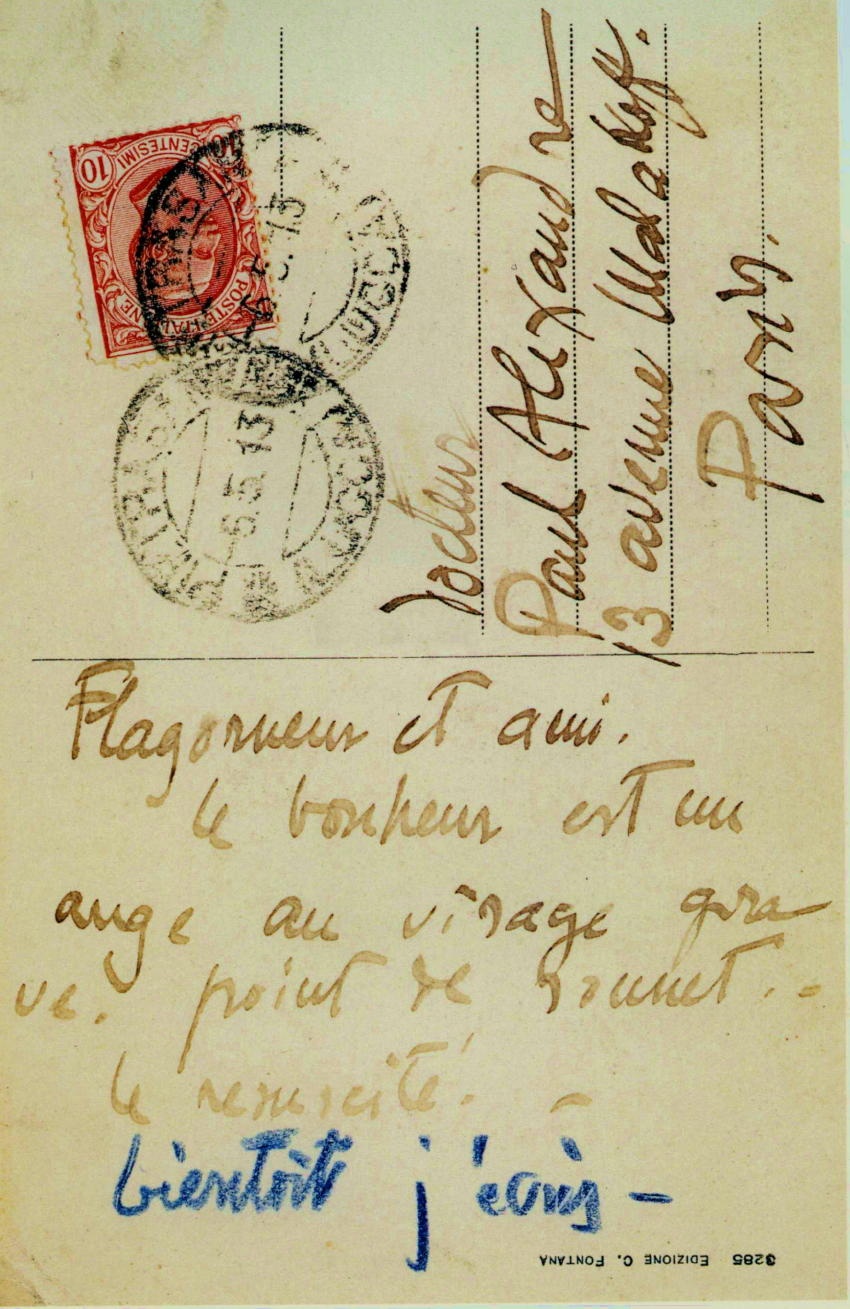 In April 1913, Modigliani visited his family in Italy. On 6th May, Paul Alexandre's birthday, Modigliani sent him two picture postcards from Lucca. The second, of a village in the hills, of which both sides are reproduced above. It is an extraordinary document for it reveals, in six brief lines, Modigliani's enduring state of mind. And the nature of his unique friendship with Paul Alexandre.

Paul Alexandre shared Modigliani's lively sense of humour. Flagorneur meaning 'Sycophant' or 'Toady' playfully mocks his friend's unwavering belief in his artistic gift. It is qualified by Ami - 'friend', showing the warmth and humour of their friendship.

Over the years, Modigliani would have discussed with Paul Alexandre the meaning of happiness. That for him it had nothing to do with material wealth, reputation, or modish thinking - artistic or otherwise. But, as is confirmed in his letters to Ghilia and his 1907 statement Ce que je cherche…., concerned the uncompromising spiritual search for the timeless beauty and mystery of the human spirit. And his absolute duty to portray it as beautifully, tenderly and truthfully as he was able.

Point de sonnet must link his definition to a favourite sonnet. And le resuscité [misspelt] - 'The reborn one' expresses a moment of exaltation. Of artistic spiritual re-awakening in which Modigliani sees even more clearly his path.

Bientôt j'écris - 'I will write soon'. But he has said all that needs to be said.

This touching communication between two men united in deep friendship and shared understanding, was the last postcard Modigliani sent his friend from his beloved Italy. For he was never to return.

The wonderful verso drawing, with its strange, shaded eye, can be related to the sculpture in The Beyeler Foundation [see below]. 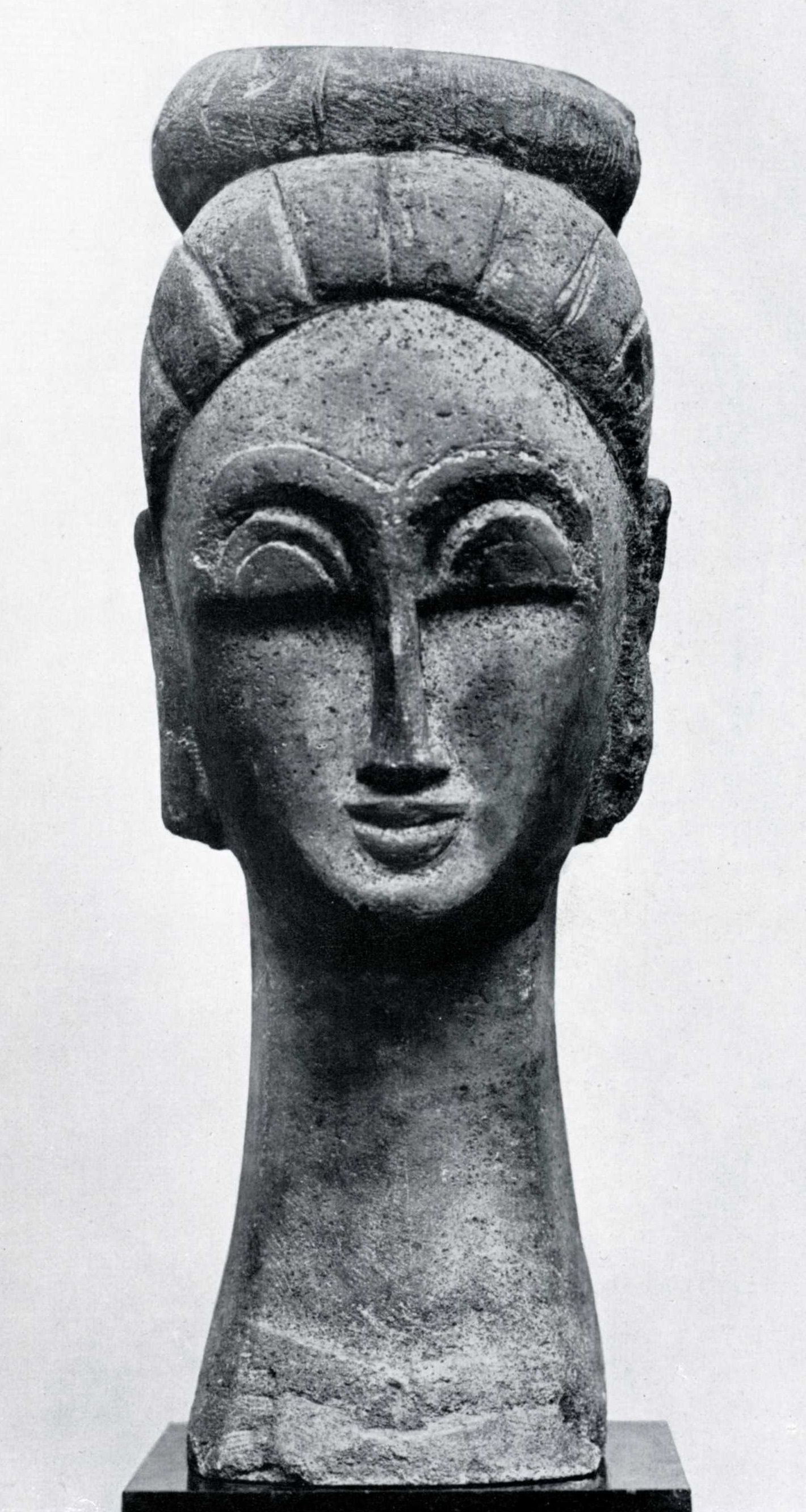 The small head, relates, very possibly, to the sculpture in the Philadelphia Museum of Art [see below]. 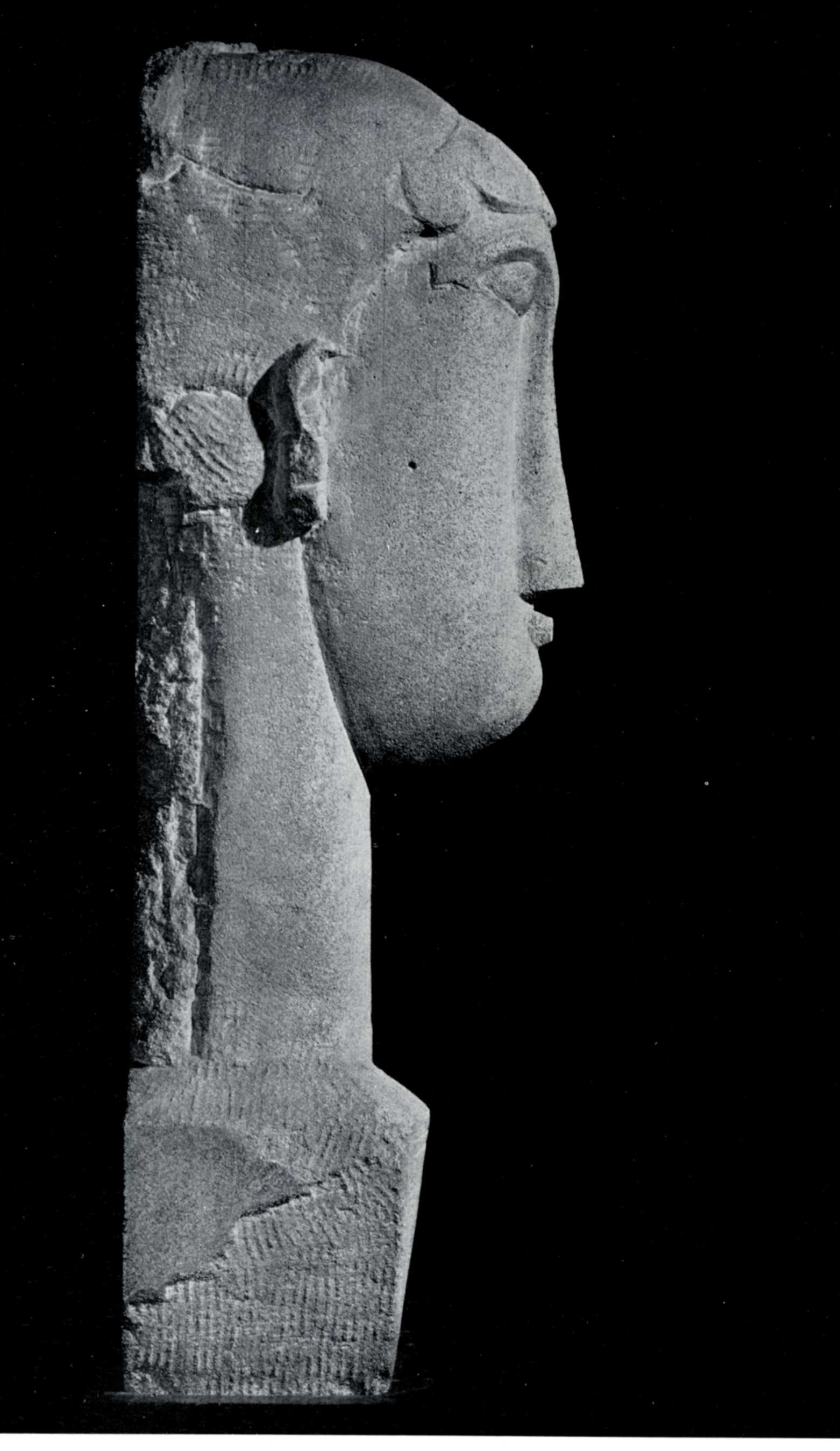