This drawing is the closest known study, in expression and pose, to Modigliani's major early painting 'The Amazon' also reproduced above. His obsessive search for an essential truth and character he perceived in his subjects, is demonstrated in the successive studies for L'Amazone reproduced in The Unknown Modigliani and in the three studies from the Lewyt Collection, auctioned at Sotheby's, 8th May 2013.

Modigliani's portrait of the Baroness Marguerite de Hasse de Villers was painted whilst she was the mistress of Jean Alexandre, the then twenty-two year old younger brother of Paul Alexandre, Modigliani's first patron.

In the spring of 1909, Paul Alexandre left Paris for Vienna to continue his studies in dermatology. He charged Jean with keeping an eye on Modigliani to ensure he at least had enough money to eat. And it was very possibly with this in mind that Jean arranged for him to paint the Baroness.

In addition to her mounting irritation at Modigliani's way of working, the final straw which decided her against purchasing the picture may have been Modigliani choosing to paint her cherished red riding jacket yellow - vital in fact to the picture's tonal harmony. It was consequently Paul Alexandre who, upon his return, paid for and acquired the painting.

Jean's letters below to Paul, published for the first time in Noël Alexandre's The Unknown Modigliani give an insight into the cause for the Baroness's aloof, almost imperious expression and posture. The evident tension between artist and sitter sets the picture apart from any other major Modigliani portrait; and helps explain its mesmerising power and character - qualities this drawing so vividly conveys.

I see Modi quite often. However, last week I let three or four days go by without going to his studio. On the fifth day I found my Modi in desperate straits, three sous in his pocket and nothing in his stomach. I could just imagine the rest, so I lent him 20 francs on account against the portrait of the Amazon. This is barely sketched onto the canvas, yet it looks as if it should be very successful as it is a very good composition. He is going to work on it tomorrow with his model. As for my portrait, it would have been better if Modigliani didn't attach such enormous importance to it. I had great difficulty preventing him from chucking it on the fire.

Modi is still managing on what he is getting for the painting of the Amazon and what he receives from home. As for painting, he's hardly done anything except for this portrait, which is very interesting and in a different manner to the one you're familiar with. He's working hard on it too.

It's now ten days since I last saw Modi, having had no time to go to his place. I gave him the rest of the money for the portrait of the Amazon, and the Baroness is a bit fed up with the way he's been organising things - he had also started something else with me, but all that has been hanging in the air………..

Modi is coming to do the portrait of the Amazon in my room. In fact, because he's fed up with fighting and realises how reluctant Marguerite is to go to his shambles of a studio, Modi has decided to do it at the Delta [where Paul Alexandre rented rooms]. It's far better in every way since she feels much more at home there, and all the inconvenience of undressing and dressing again is made much easier by the facilities, none of which were available at the Cité Falguière. The portrait seems to be coming along well, but I'm afraid it will probably change ten times again before it's finished. However, to overcome this real problem, Marguerite has told him she is leaving on 3 June and that she would like her portrait to be finished by that date. In any case, this business has worked out rather well for me as I have my portrait at last and he came to varnish it yesterday at home. Actually, having had my fill of it, I told him, once, that I was coming to pose for the last time. And in fact my portrait is none the worse for this. As to his financial situation, it is really terrible, and he's resorting to the usual credit system with his paint supplier and the restaurant. Shortly after my last letter, in which I wrote to you about him, Modi came to find me with nothing left in his pockets and offered me his portrait of little Jeanne for 20 francs.

Noël Alexandre, in his monograph, The Unknown Modigliani, writes of this episode:

'In May 1909, Jean was only twenty-two (Modigliani was twenty-four). He was studying to be a pharmacist and still lived with his parents at 13 Avenue Malakoff in the Trocadéro district. He had a girlfriend, Baroness Marguerite de Hasse de Villers, who lived in the same elegant neighbourhood (a few doors away in the same avenue). He had taken her to the Delta and commissioned a portrait of her as a horsewoman ('Amazon') from Modigliani as she was an accomplished rider and liked to be dressed in a riding habit. Jean had already been sitting for some time for his own portrait in the painter's studio at 14 Cité Falguière, but he had begun to lose hope and felt that Modigliani, who was never satisfied with what he painted and was always ready to destroy it, would never finish it.

On 5th September 1909, Modigliani wrote to Paul from Livorno, not without irony:

But you're busy, you're working. Oh, you poor fellow!

In the same way, we are shown that Modigliani was never in a hurry to finish things, as if time had no importance for him. He would go around the subject he was working on, keeping it constantly in mind, repeatedly starting preparatory sketches, which were all new experiments, and never wanting to give any time off to his model, who was more or less taken over by him. It also emerges that he was a man who preferred to deal with one thing at a time, and we can see that he had to force himself to work on both the Baroness's portrait and that of Jean at the same time to satisfy Jean's demands.

Jean's letters to his brother and the preparatory studies for the portrait of 'The Amazon' published in this book give a clear idea of the genesis of that work. The Baroness did not like her portrait very much and recognised herself in it still less when Modigliani decided at the last moment that he had to repaint her red jacket yellow. Jean died of tuberculosis on 8th June 1913.

Included with the drawing, and previously unpublished, are the two poignant only recently discovered letters the Baroness wrote to Paul Alexandre upon learning of Jean's death. They reveal a very different side to the woman gazing aloofly down at us in Modigliani's portrait. Her letters, in translation, are published here for the first time - with facsimiles of the originals below. They offer a moving insight into her character and feeling for Jean; and a fascinating addition to the painting's history. Noël Alexandre did not remember ever seeing the painting; so that his father would almost certainly have agreed to let the Baroness acquire it from him, probably for the sum he had paid Modigliani.

I have learnt, entirely indirectly, of the terrible sorrow that has just struck you with the loss of poor Jean.

I cannot tell you of the pain I feel!! I cannot believe such a calamity. He had written to me a while ago but gave no indication of the state of his health. I instinctively sensed the truth, that he was suffering and I had the details from one of my friends.

Why did you not send me a letter letting me know of his death? I receive many letters and would not have been compromised*.

I would very much like to see you to talk about the dearly departed, I saw him again a year ago at this time.

I am also anxious to tell you that I want very much to have back my things which have remained at ' The Delta' and which are now of interest to no-one else but myself. Also with you at Avenue Maliakoff is my portrait as 'Amazon' by Modigliani. I would very much like to come to an understanding with you about all that.

Would you, Sir, arrange to meet me, and believe in my ardent sentiments of condolence.

* Paul Alexandre may not have written to her because she might since have married; or been married when Modigliani painted her.

I have received this instant by the nine o'clock post your letter.

I accept for tomorrow Wednesday at 5 o'clock, at 62 Rue Pigalle the rendez-vous you wish to give me.

I am very moved to see you again. I feel so much sorrow!! but I am very happy to be able to speak with you.

In the intervening four years since Modigliani painted her portrait, the Baroness may have sensed something of his greatness. But it was, most probably, as a remembrance of her deep affection for Jean that she suddenly wanted the painting, for she could have discussed buying it when they had met the previous year. This drawing expresses more completely than any other

known study, the spirit and character of Modigliani's unique portrait. 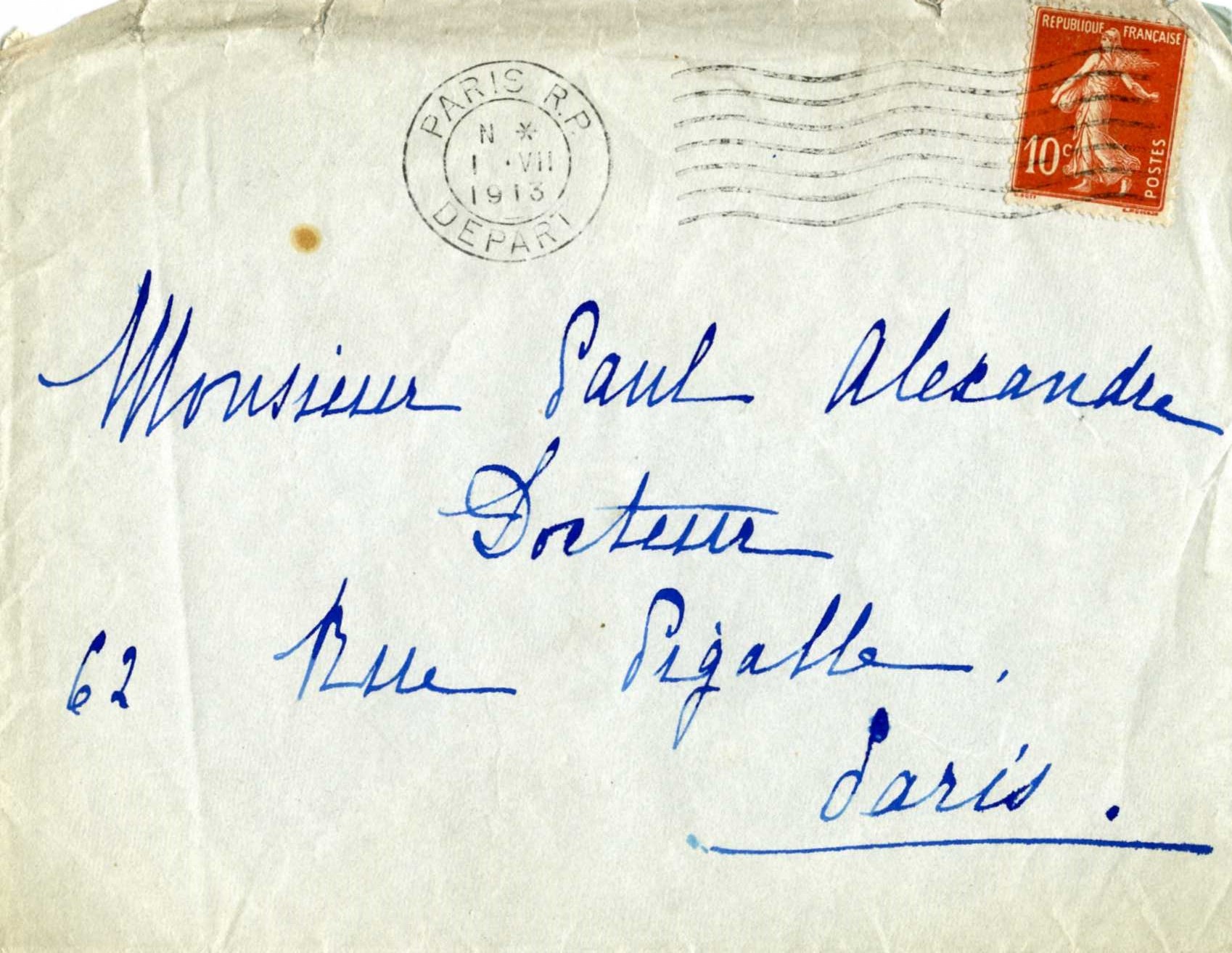 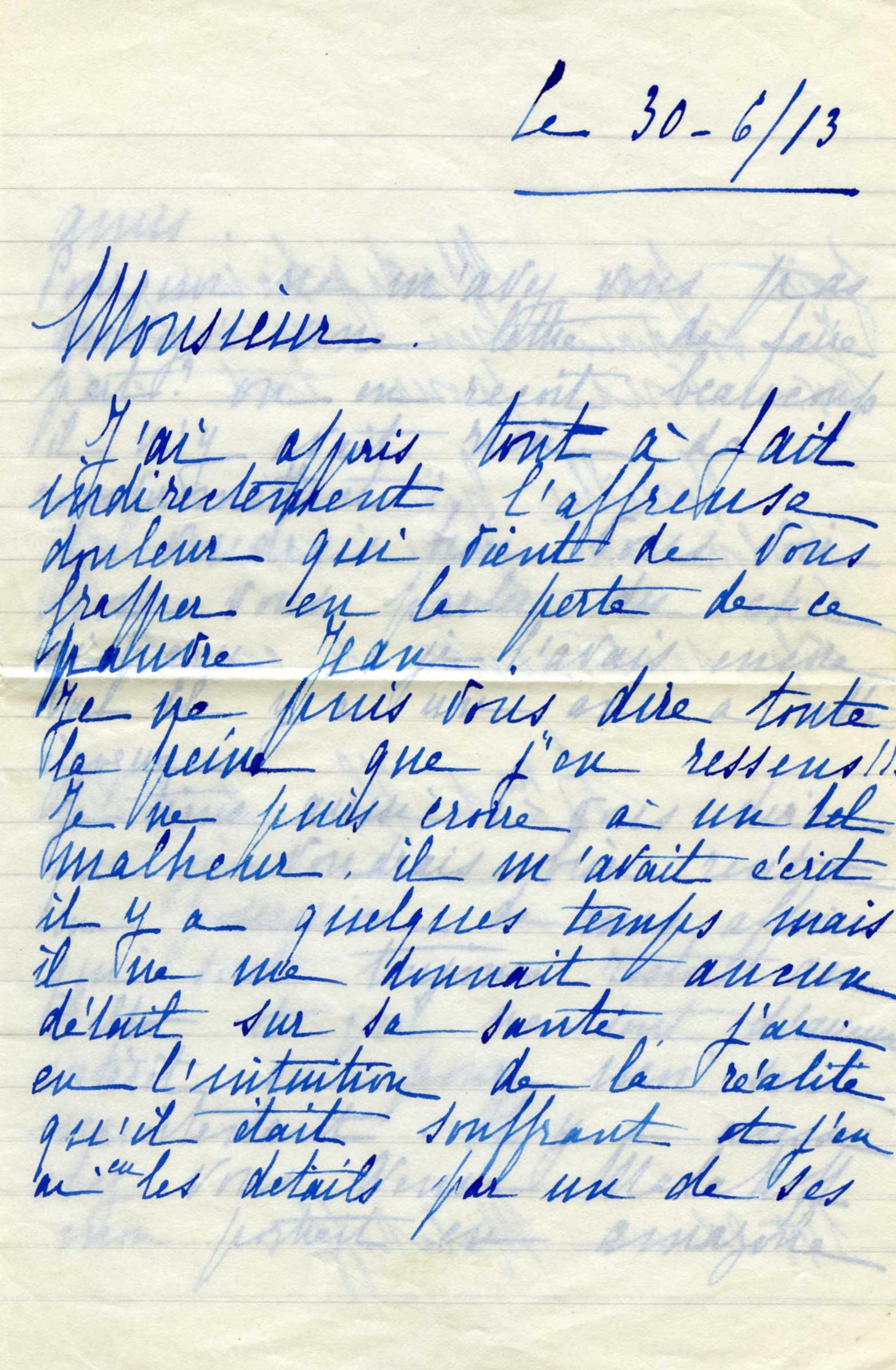 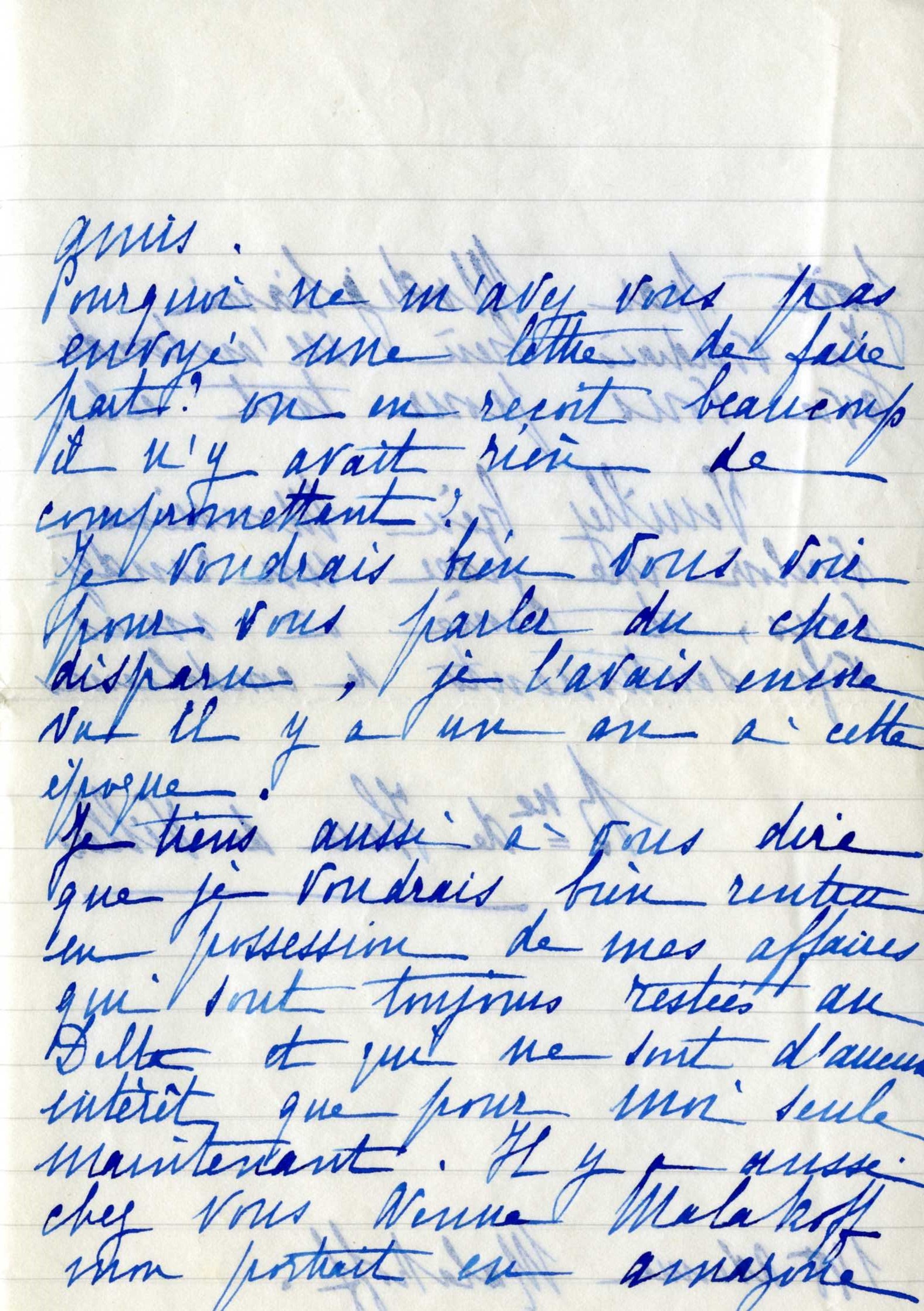 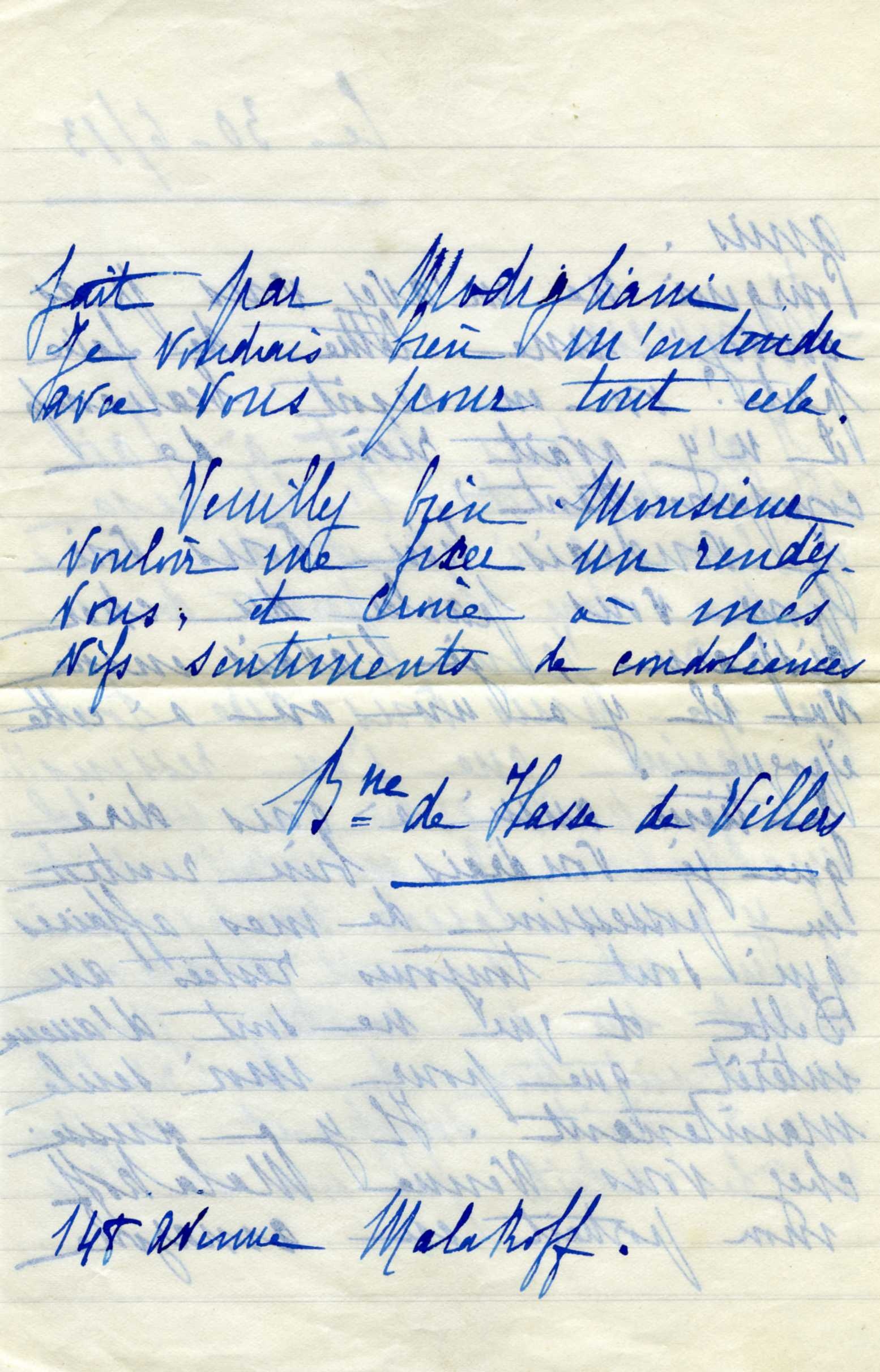 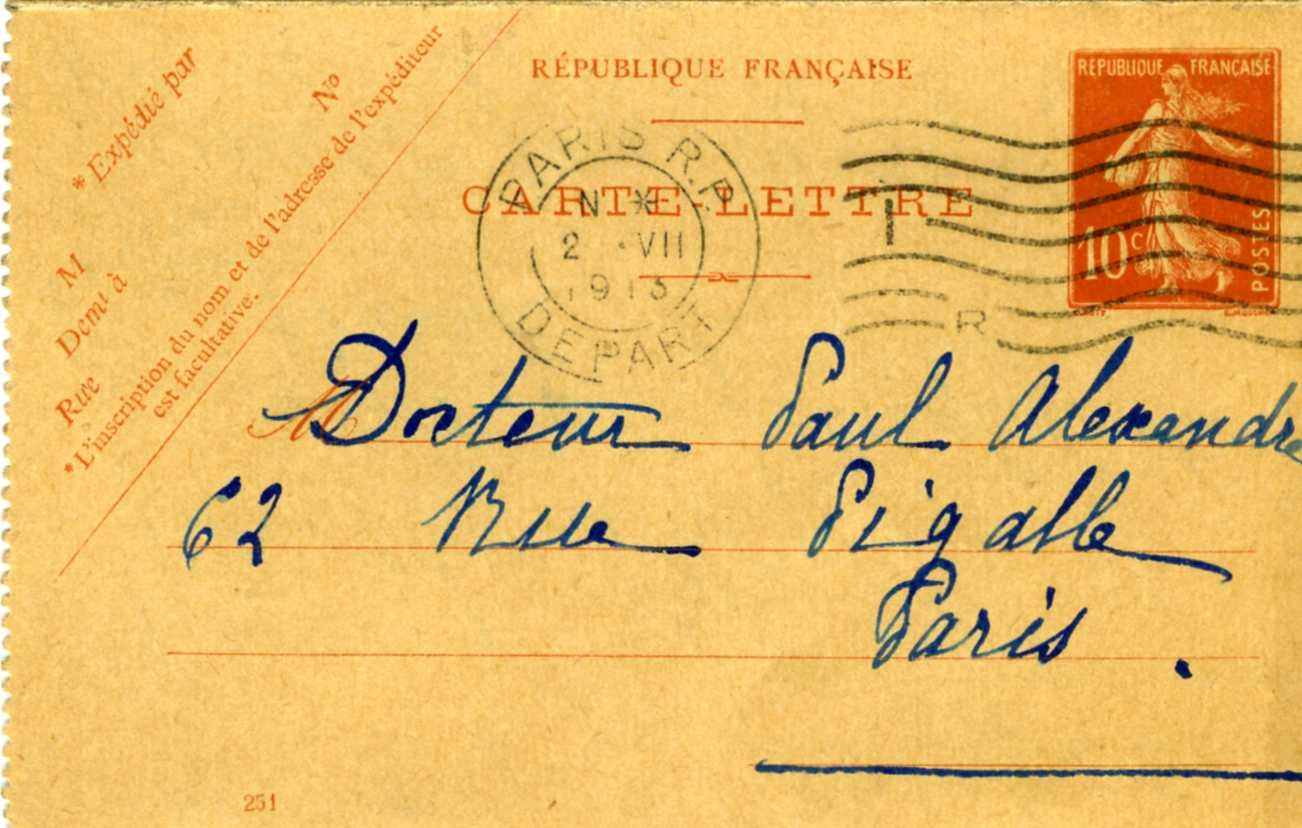 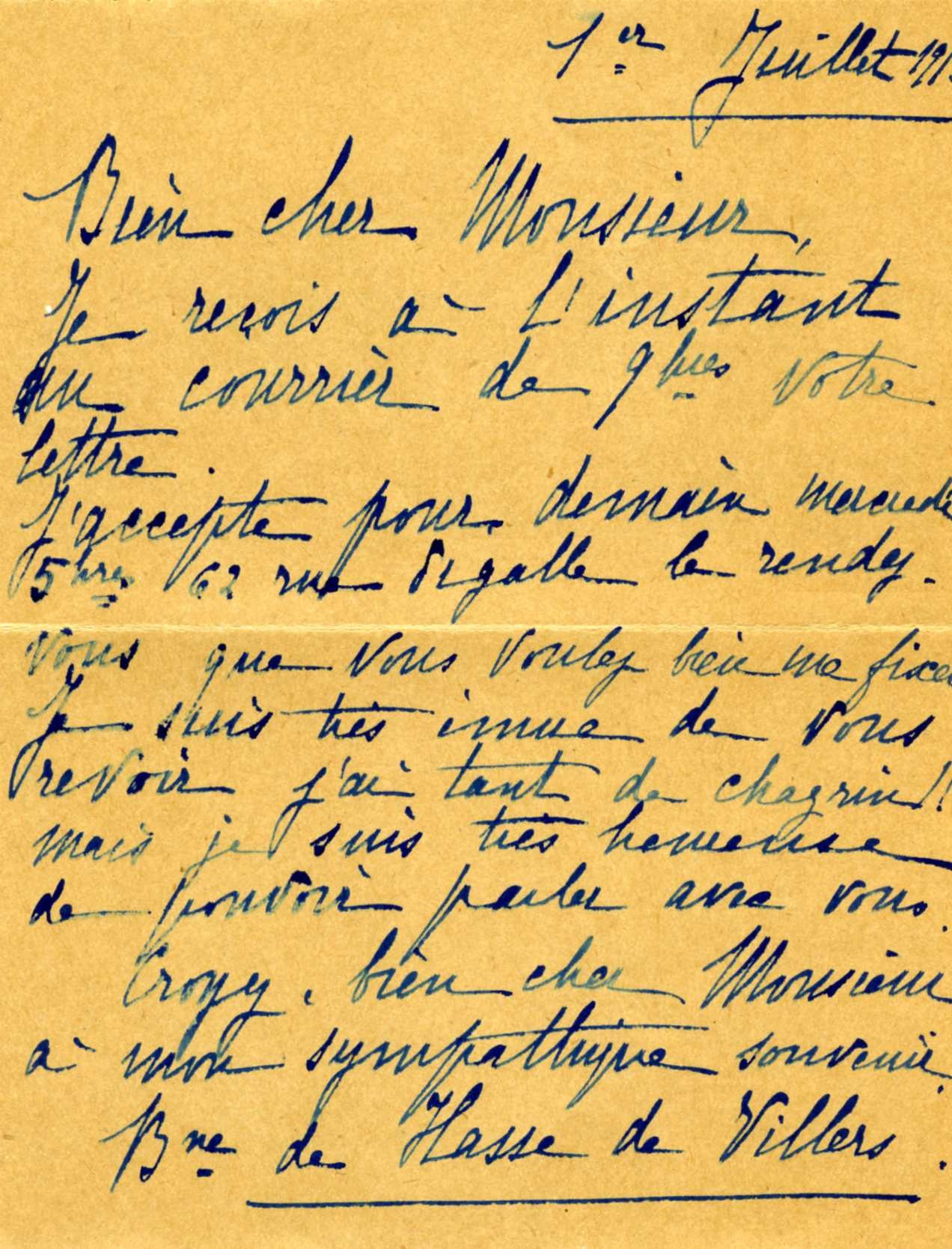