This wonderfully tender and harmonious painting is one of the most beautiful, touching and serene of Renoir's last works. The photograph below from the major 1934 late Renoir painting exhibition at The Paul Rosenberg Gallery, Paris shows La Lecture next to Renoir's undisputed late masterpiece Les Baigneuses of 1918-19.

La Lecture demonstrates Renoir's masterly ability to lyrically and vibrantly portray his sitters in an entirely natural way. In later years, success allowed him to paint the sitters who most interested and touched him, especially his family and those he chose to see on a daily basis.

La Lecture magically captures a lovingly observed moment in which two beautiful young women, oblivious to all around them, even the artist, are entranced by the words they read.

In 1954, La Lecture was sold at the Galerie Charpentier in Paris to a private English collector in whose family possession it remained until its sale. Its first museum showing since 1938 was in the 2010 Philadelphia Museum of Art's reappraising landmark exhibition Renoir in The 20th Century, where it was tellingly displayed in the same room as Les Baigneuses; and hung between The Courtauld Gallery's Woman Tying her Shoe and The Art Gallery of Ontario's The Concert (see below).

Whilst the sitters cannot, with certainty, be identified, the dark-haired woman on the right closely resembles Gabrielle (see Gabrielle à la Rose, Musée d'Orsay, below) the young maid who remained with the Renoir family until 1913 and became a favourite model. The other sitter may be Andrée Heuschling, who was introduced to him by Matisse and married Jean Renoir in 1921. 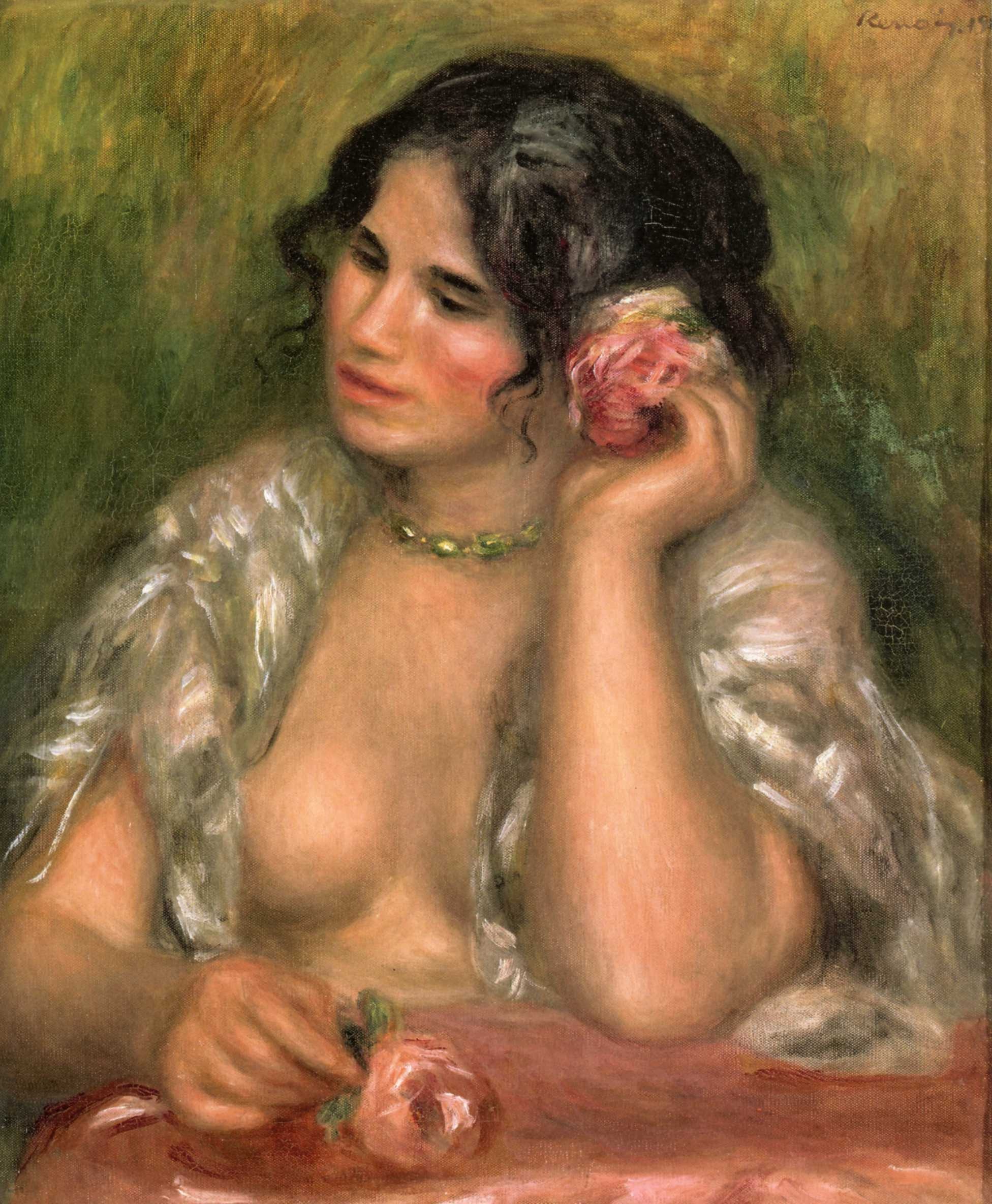 Renoir, in his late work, was able to reconcile his profound love of the painters of the past - among them Titian, Raphael, Rubens, Fragonard and Watteau - with his vision of the life he saw around him. It is this, in part, that accounts for his influence on 20th century artists, most notably Picasso, Matisse and Bonnard.

John House, in the 'Renoir in the 20th Century' exhibition catalogue, writes:

Throughout his career, Renoir tried to break down the barriers between the art of the past and his own direct visual experience of the world around him. The past painters whom he most admired were those whose work, as he saw it, revealed a belief in timeless notions of beauty, but at the same time was enlivened by direct observation.

Miraculously, Renoir was able to transcend his own physical suffering, the death of his wife and the wounding of his two sons in the First World War; and continue painting with undiminished passion. Pain passes, but beauty endures. I am perfectly happy and will not die until I have created my masterpiece, he told Matisse.

La Lecture is a wonderful example of the artist continuing joyously to paint the sublime beauty of women. His vibrant, resonating colours dominated by his signature 'red' became a feature of his late work. As Renoir explained to the American painter Walter Pach:

I want a red to be sonorous, to sound like a bell; if it doesn't turn out that way, I put more reds or other colours till I get it. (...) there are myriads of tiny tints. I must find the ones that will make the flesh on my canvas live and quiver.

The richness of colour, freedom and monumental figures of Renoir's late work greatly impressed Picasso. And his own monumental neo-Classical paintings (see below) from the early 1920s owe much to the Renoirs he saw at the dealer Paul Rosenberg. 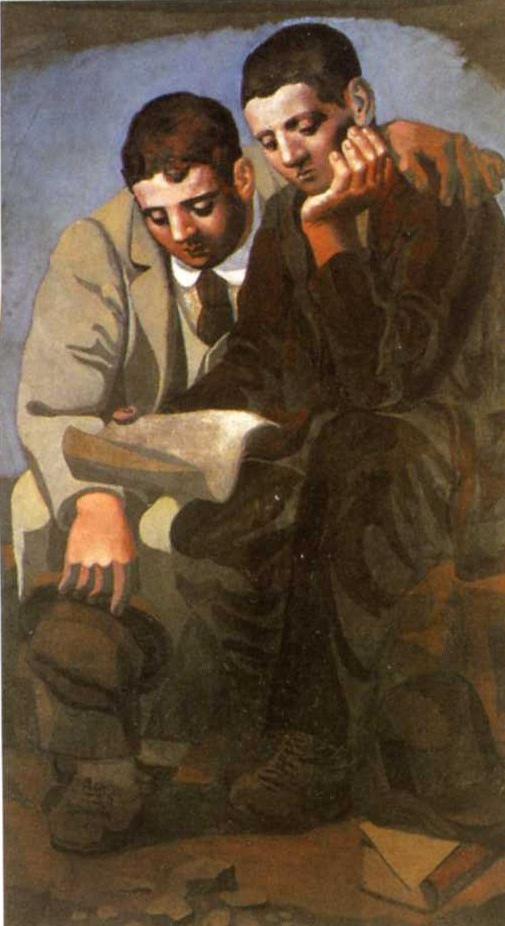 Picasso's studio was next to the Rosenberg gallery, but despite Rosenberg's attempts to introduce them, the two artists never met. However, in homage, Picasso made his piercingly moving posthumous pencil portrait of Renoir  based on Durand-Ruel's photograph. He later acquired seven Renoir paintings, the majority depicting the late monumental figures.

Bonnard met Renoir in the 1890's through 'La Revue Blanche'. 'You have a little note of charm', Renoir told him, 'Do not neglect it. It is a precious gift'. Bonnard's Le Petit Dejeuner (below) shows the deep affinity he felt for Renoir's work. 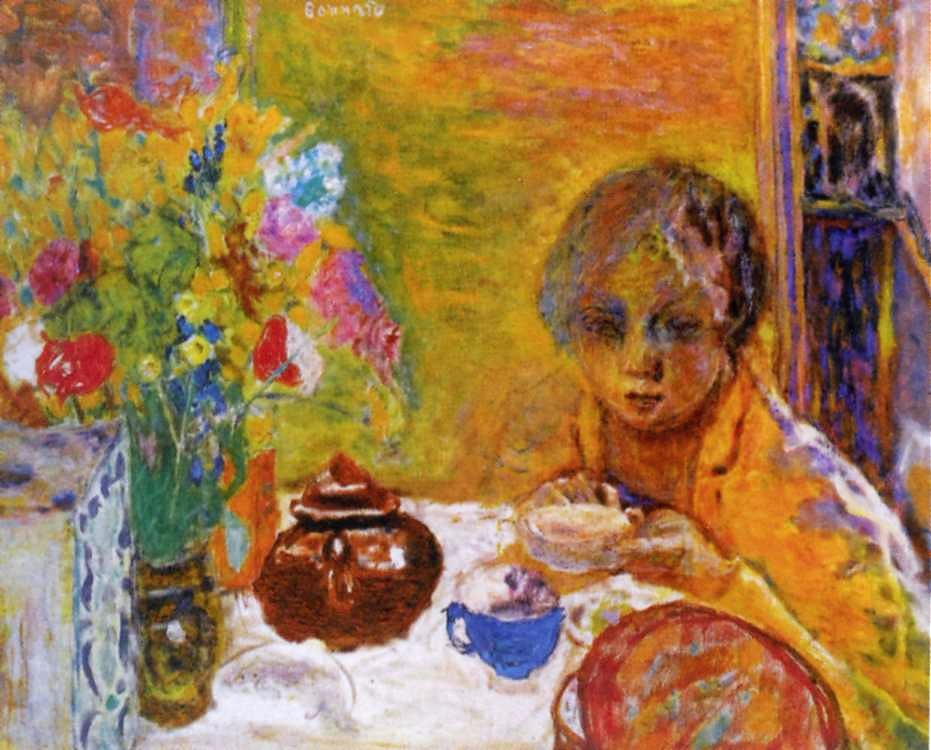 Matisse, who lived in the South of France, first visited Renoir in 1917. He would watch Renoir painting in his garden and sometimes join him (see photograph below).

Matisse owned several late Renoirs and continued to see Renoir's family after the artist's death. In 1920, he wrote: The visit I made last week to Renoir's, where I looked over his pictures in my own time, helped me a great deal.  (H. Matisse, quoted in ibid, p. 139).

Renoir's artistic genius, also his heroism, made a deep impression on Matisse. He described Renoir's late work as including 'The loveliest nudes ever painted. No one has done better'. And he proclaimed Les Baigneuses 'His masterpiece, one of the most beautiful pictures ever painted' (quoted in ibid, p. 142). Matisse's The Moorish Screen1922 would meaningfully hang with La Lecture. 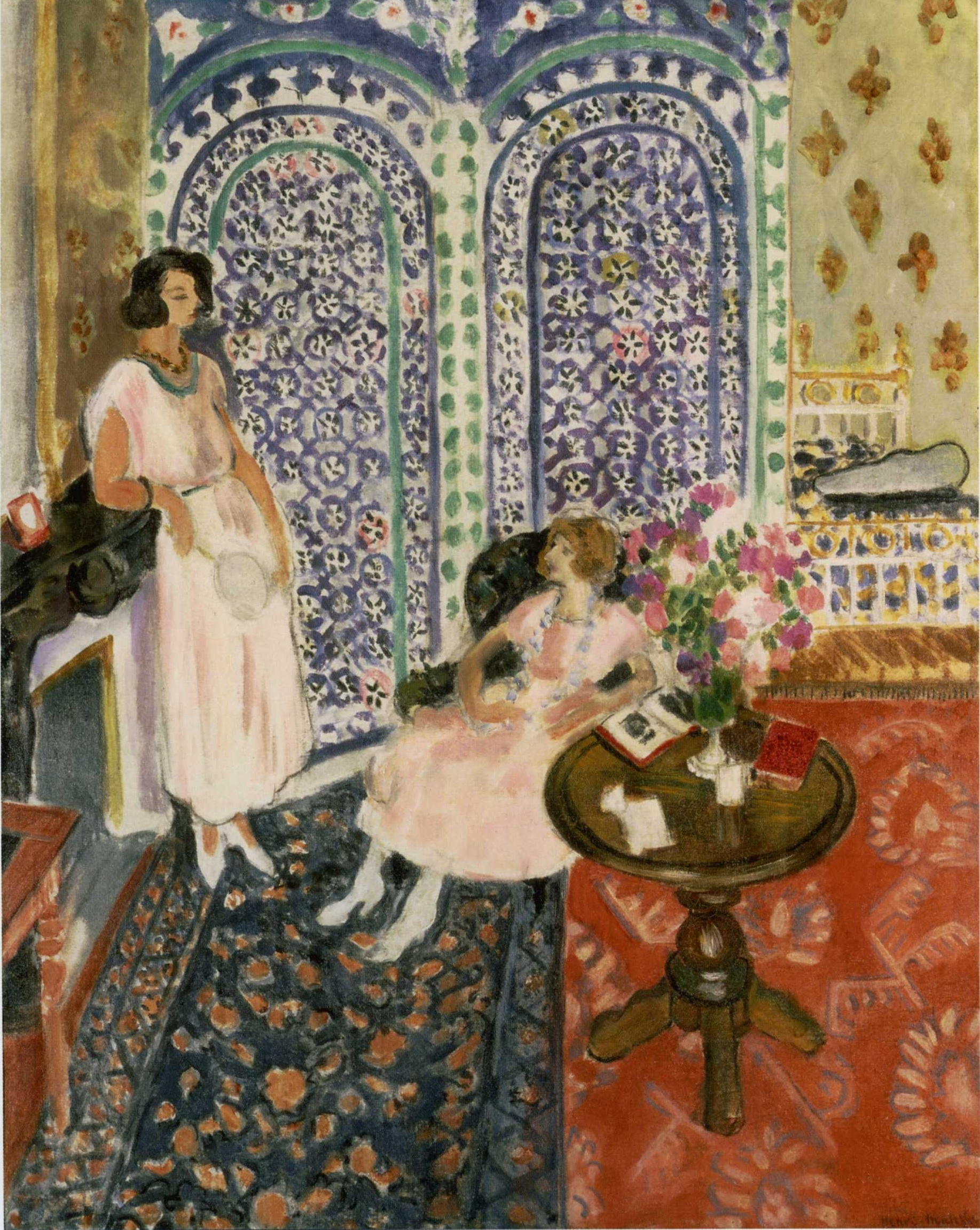 Renoir excels at portraits. Not only does he catch the external features, but through them he pinpoints the model's character and inner self. I doubt whether any painter has ever interpreted women in a more seductive manner. The deft and lively touches of Renoir's brush are charming, supple and unrestrained, making flesh transparent and tinting the cheeks and lips with a perfect living hue. Renoir's women are enchantresses.

Were a selection ever to be made of the most joyously touching, vibrant and life-affirming paintings of the 20thCentury, La Lecture would surely be prominent among them.